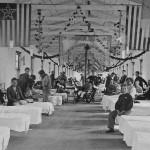 By Phin Upham After the Civil War, Abraham Lincoln was able to develop a clear picture of the destruction those battles had wrought across American soil. Both soldiers and sailors had suffered heavy casualties throughout the conflict, and Lincoln authorized the creation of an asylum that would house them throughout their convalescence. Two homes were… Read More